We use elliptic curves because they provide a cryptographic group, i.e. a group in which the discrete logarithm problem (discussed below) is hard.

There are several ways to define the curve equation, but for our purposes, let Fp​ be a large (255-bit) field, and then let the set of solutions (x,y) to y2=x3+b for some constant b define the Fp​-rational points on an elliptic curve E(Fp​). These (x,y) coordinates are called "affine coordinates". Each of the Fp​-rational points, together with a "point at infinity" O that serves as the group identity, can be interpreted as an element of a group. By convention, elliptic curve groups are written additively.

"Three points on a line sum to zero, which is the point at infinity."

The group addition law is simple: to add two points together, find the line that intersects both points and obtain the third point, and then negate its y-coordinate. The case that a point is being added to itself, called point doubling, requires special handling: we find the line tangent to the point, and then find the single other point that intersects this line and then negate. Otherwise, in the event that a point is being "added" to its negation, the result is the point at infinity.

The ability to add and double points naturally gives us a way to scale them by integers, called scalars. The number of points on the curve is the group order. If this number is a prime q, then the scalars can be considered as elements of a scalar field, Fq​.

Elliptic curves, when properly designed, have an important security property. Given two random elements G,H∈E(Fp​) finding a such that [a]G=H, otherwise known as the discrete log of H with respect to G, is considered computationally infeasible with classical computers. This is called the elliptic curve discrete log assumption.

If an elliptic curve group G has prime order q (like the ones used in Halo 2), then it is a finite cyclic group. Recall from the section on groups that this implies it is isomorphic to Z/qZ, or equivalently, to the scalar field Fq​. Each possible generator G fixes the isomorphism; then an element on the scalar side is precisely the discrete log of the corresponding group element with respect to G. In the case of a cryptographically secure elliptic curve, the isomorphism is hard to compute in the G→Fq​ direction because the elliptic curve discrete log problem is hard.

It is sometimes helpful to make use of this isomorphism by thinking of group-based cryptographic protocols and algorithms in terms of the scalars instead of in terms of the group elements. This can make proofs and notation simpler.

For instance, it has become common in papers on proof systems to use the notation [x] to denote a group element with discrete log x, where the generator is implicit.

We also used this idea in the "distinct-x theorem", in order to prove correctness of optimizations for elliptic curve scalar multiplication in Sapling, and an endomorphism-based optimization in Appendix C of the original Halo paper.

The simplest situation is doubling a point (x0​,y0​). Continuing with our example y2=x3+b, this is done first by computing the derivative λ=dxdy​=2y3x2​.

To get the expression for x1​, we substitute y=λ(x0​−x)−y0​ into the elliptic curve equation:

This unfortunately requires an expensive inversion of 2y. We can avoid this by arranging our equations to "defer" the computation of the inverse, since we often do not need the actual affine (x′,y′) coordinate of the resulting point immediately after an individual curve operation. Let's introduce a third coordinate Z and scale our curve equation by Z3 like so:

Our original curve is just this curve at the restriction Z=1. If we allow the affine point (x,y) to be represented by X=xZ, Y=yZ and Z=0 then we have the homogenous projective curve

Obtaining (x,y) from (X,Y,Z) is as simple as computing (X/Z,Y/Z) when Z=0. (When Z=0, we are dealing with the point at infinity O:=(0:1:0).) In this form, we now have a convenient way to defer the inversion required by doubling a point. The general strategy is to express x′,y′ as rational functions using x=X/Z and y=Y/Z, rearrange to make their denominators the same, and then take the resulting point (X,Y,Z) to have Z be the shared denominator and X=x′Z,Y=y′Z.

Projective coordinates are often, but not always, more efficient than affine coordinates. There may be exceptions to this when either we have a different way to apply Montgomery's trick, or when we're in the circuit setting where multiplications and inversions are about equally as expensive (at least in terms of circuit size).

Notice how the denominators of x′ and y′ are the same. Thus, instead of computing (x′,y′) we can compute (X,Y,Z) with Z=8Y3Z3 and X,Y set to the corresponding numerators such that X/Z=x′ and Y/Z=y′. This completely avoids the need to perform an inversion when doubling, and something analogous to this can be done when adding two distinct points.

Imagine that Fp​ has a primitive cube root of unity, or in other words that 3∣p−1 and so an element ζp​ generates a 3-order multiplicative subgroup. Notice that a point (x,y) on our example elliptic curve y2=x3+b has two cousin points: (ζp​x,y),(ζp2​x,y), because the computation x3 effectively kills the ζ component of the x-coordinate. Applying the map (x,y)↦(ζp​x,y) is an application of an endomorphism over the curve. The exact mechanics involved are complicated, but when the curve has a prime q number of points (and thus a prime "order") the effect of the endomorphism is to multiply the point by a scalar in Fq​ which is also a primitive cube root ζq​ in the scalar field.

Given a point on the curve P=(x,y), we know that its negation −P=(x,−y) is also on the curve. To uniquely specify a point, we need only encode its x-coordinate along with the sign of its y-coordinate.

As mentioned in the Fields section, we can interpret the least significant bit of a field element as its "sign", since its additive inverse will always have the opposite LSB. So we record the LSB of the y-coordinate as sign.

Pallas and Vesta are defined over the Fp​ and Fq​ fields, which elements can be expressed in 255 bits. This conveniently leaves one unused bit in a 32-byte representation. We pack the y-coordinate sign bit into the highest bit in the representation of the x-coordinate:

The "point at infinity" O that serves as the group identity, does not have an affine (x,y) representation. However, it turns out that there are no points on either the Pallas or Vesta curve with x=0 or y=0. We therefore use the "fake" affine coordinates (0,0) to encode O, which results in the all-zeroes 32-byte array.

When deserializing a compressed curve point, we first read the most significant bit as ysign, the sign of the y-coordinate. Then, we set this bit to zero to recover the original x-coordinate.

If x=0,y=0, we return the "point at infinity" O. Otherwise, we proceed to compute y=x3+b​. Here, we read the least significant bit of y as sign. If sign == ysign, we already have the correct sign and simply return the curve point (x,y). Otherwise, we negate y and return (x,−y).

Let Ep​ be an elliptic curve over a finite field Fp​, where p is a prime. We denote this by Ep​/Fp​. and we denote the group of points of Ep​ over Fp​, with order q=#E(Fp​). For this curve, we call Fp​ the "base field" and Fq​ the "scalar field".

We instantiate our proof system over the elliptic curve Ep​/Fp​. This allows us to prove statements about Fq​-arithmetic circuit satisfiability.

(aside) If our curve Ep​ is over Fp​, why is the arithmetic circuit instead in Fq​? The proof system is basically working on encodings of the scalars in the circuit (or more precisely, commitments to polynomials whose coefficients are scalars). The scalars are in Fq​ when their encodings/commitments are elliptic curve points in Ep​/Fp​.

However, most of the verifier's arithmetic computations are over the base field Fp​, and are thus efficiently expressed as an Fp​-arithmetic circuit.

(aside) Why are the verifier's computations (mainly) over Fp​? The Halo 2 verifier actually has to perform group operations using information output by the circuit. Group operations like point doubling and addition use arithmetic in Fp​, because the coordinates of points are in Fp​.

This motivates us to construct another curve with scalar field Fp​, which has an Fp​-arithmetic circuit that can efficiently verify proofs from the first curve. As a bonus, if this second curve had base field Eq​/Fq​, it would generate proofs that could be efficiently verified in the first curve's Fq​-arithmetic circuit. In other words, we instantiate a second proof system over Eq​/Fq​, forming a 2-cycle with the first: 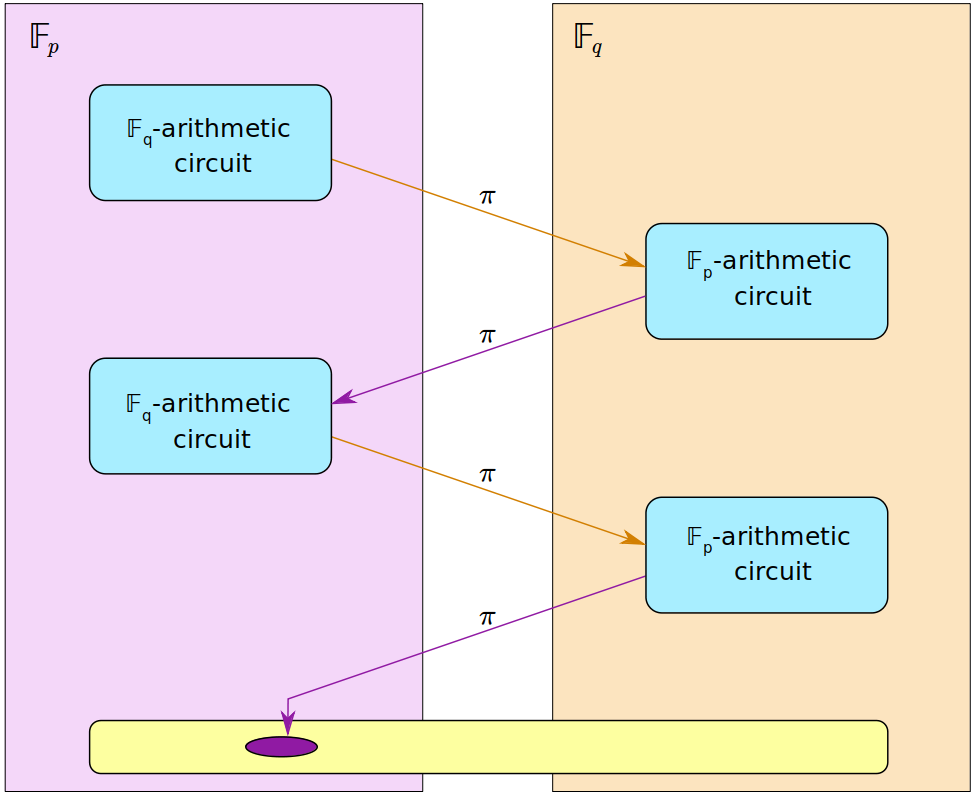 Sometimes it is useful to be able to produce a random point on an elliptic curve Ep​/Fp​ corresponding to some input, in such a way that no-one will know its discrete logarithm (to any other base).

This is described in detail in the Internet draft on Hashing to Elliptic Curves. Several algorithms can be used depending on efficiency and security requirements. The framework used in the Internet Draft makes use of several functions: